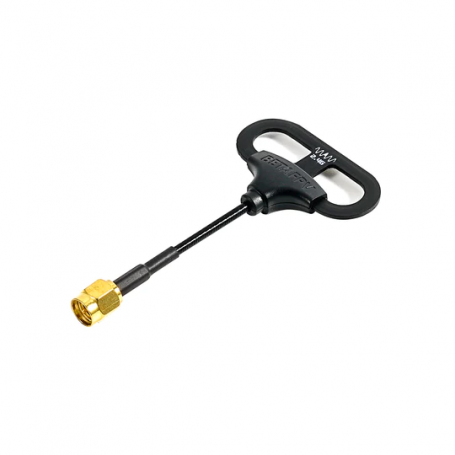 Designed and manufactured by BETAFPV, the Loop Antenna is used for 2.4G/868MHz/915MHz TX modules or radios. It is an omnidirectional antenna that provides a 360-degree horizontal radiation pattern with a gain of 2.3dBi, covering a wider range. Besides, by soldering the coaxial cable to the antenna, it features less signal transmission loss for better performance.

€8.26
Tax included
Subscribe To When In Stock
You have successfully subscribed to this product All antennas have a specific use case and choosing a suitable antenna is important to fly a quadcopter. BETAFPV Loop antenna is an omnidirectional antenna that radiates and receives the RF energy equally, providing a 360-degree radiation pattern that allows connectivity in all horizontal directions. BETAFPV Moxon antenna is a directional antenna that focuses RF energy in a required direction. For example, if pilots fly a quadcopter around within a certain range, the Loop antenna is a good choice. When flying a quadcopter for long distances in one direction, the Moxon antenna works better.