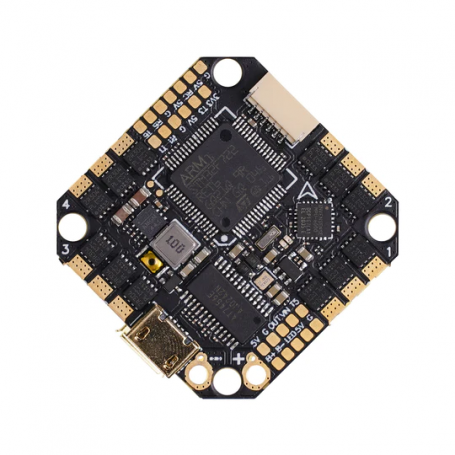 F722 2-6S AIO 35A FC is a very reliable FC that is made to meet your advanced FPV needs. Comes with an F722 chip and BLHeli_S ESC firmware, this board provides a better performance capability and higher calculation speed, which brings pilots a more stable and smoother flight.

€70.24
Tax included
Subscribe To When In Stock
You have successfully subscribed to this product

What's more, F722 AIO 35A FC has specially added a 6-pin connector for DJI Digital VTX, just plug & play, less solder work needed, super easy to install. It also can handle up to 6S of input voltage and push your FPV racer to the max. We highly recommend it for 4-5'' Toothpick quad, such as X-Knight 5'' Toothpick Quadcopter. The F722 FC ICM42688 version has the same solder pad and layout as BMI270 except for the gyro chip. Besides, you can also find the difference in Betaflight settings. There are 2 LEDs on the bottom of the board to indicate the status, including the Receiver LED ( Green) and FC Power LED ( Red ). How to Connect the External Rx to the F722 FC